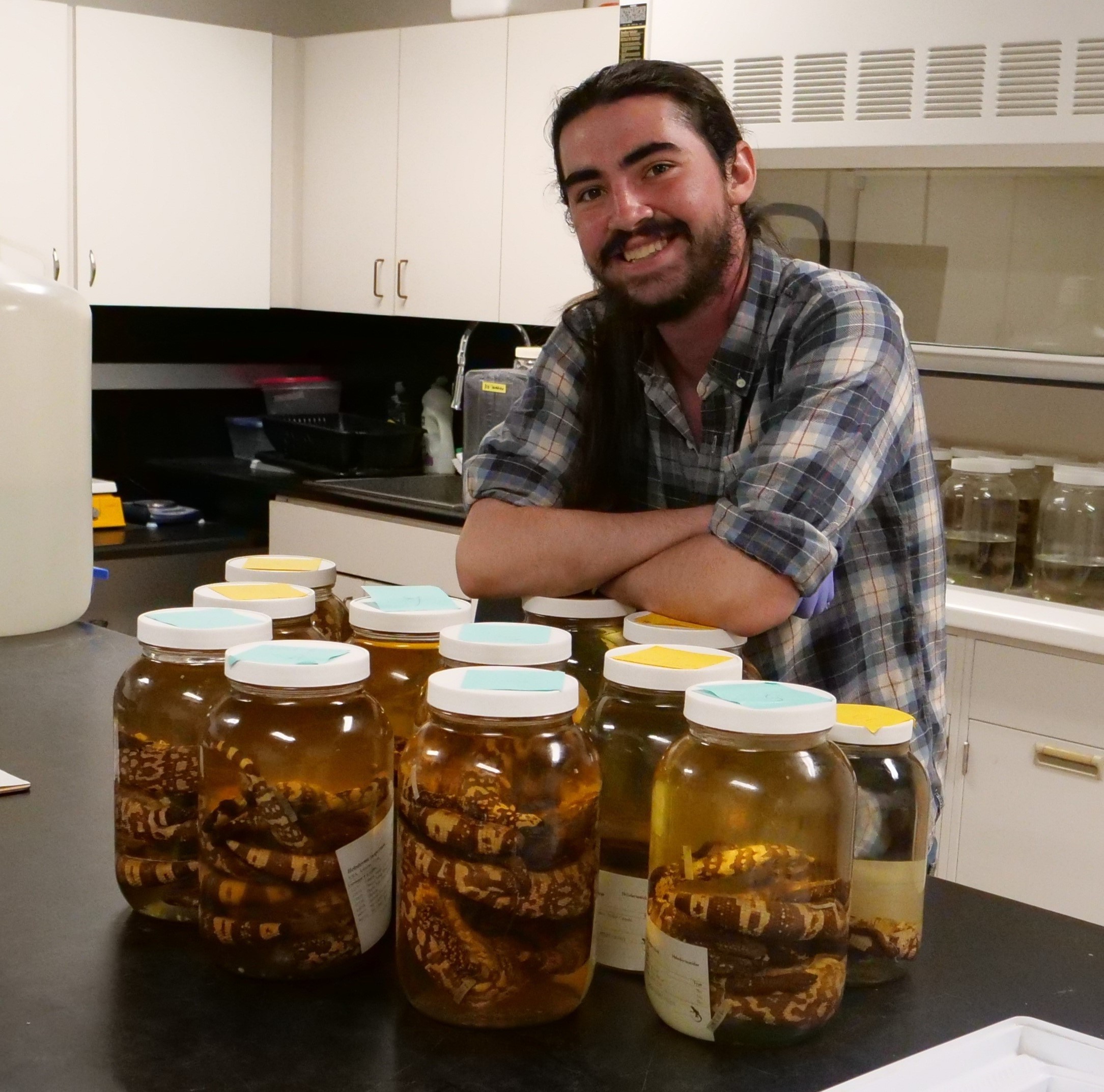 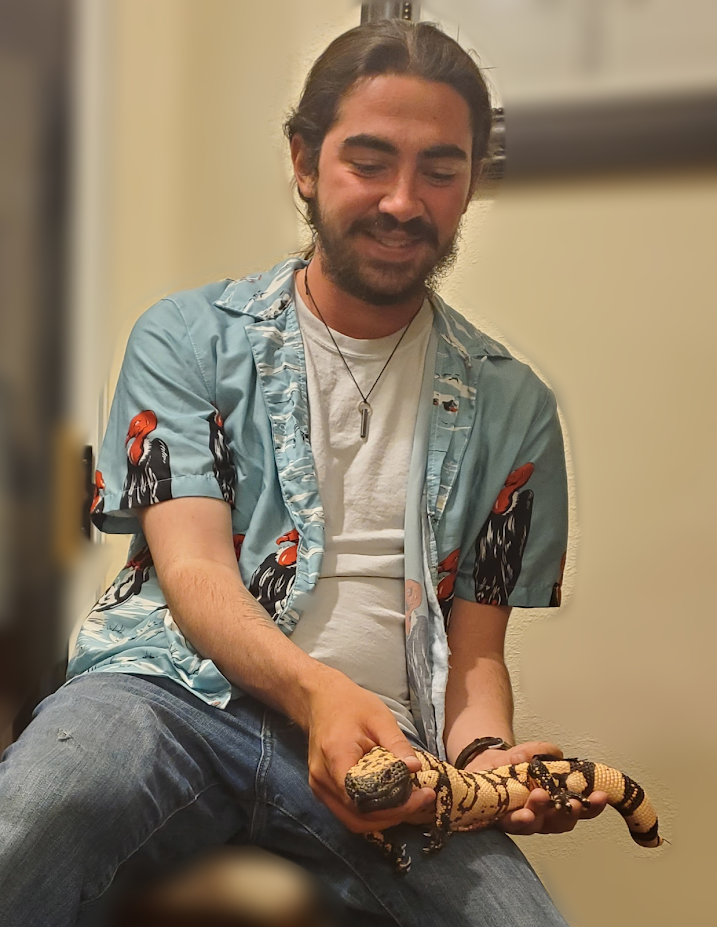 In August 2020 I started my graduate schooling as a Masters Student in the Gienger Lab at Austin Peay State University. My thesis research focuses on comparing mechanistic models and correlative models ability to predict environmental influences on variation in average body size of Heloderma suspectum (Gila Monster) in populations across their range. The thermal constraints of their environment are especially important to Heloderma because they are surface foragers who retreat to fossorial shelters that act as thermal refugia when surface temperatures are outside their preferred range. Therefore foraging is severely limited by environmental conditions.

I use spatially explicit niche models to predict the maximum potential time for individuals in a particular location to forage based off the microclimate they would be experiencing and the thermal limitations of the species' biology. We then compare the maximum predicted foraging hours to asymptotic body sizes (calculated based off body size measurements taken from previous research, field work, and museum specimens) for several populations across their range. I compare this more nuanced method of predicting asymptotic body size of populations with a suite of correlative environmental models ability to predict population body size. The goal of this study is to test optimal foraging theory in Gila Monsters and add to the literature comparing correlative and mechanistic approaches to modeling in wildlife. It also has the potential to identify populations already at their thermal extremes which may be at risk under climate change In conjunction with my work as a field technician for the Northeast Amphibian Monitering and Research Initiative in summer of 2020, I started analysis on several years of NEARMI collected data which will eventually become a manuscript. This research focuses on variability in the structure of density dependence within two species of obligate vernal pool breeding amphibians native to the Northeastern US, Ambystoma maculatum (Spotted Salamander) and Lithobates sylvaticus (Wood Frog). This study looks at over ten years of data, collected across over 1000 ephemeral wetlands within 15 different wildlife management areas and national parks across the northeastern US, covering much of these species range (Southern end for L. sylvaticus and northern end for A. maculatum). I use Bayesian modeling in WinBugs to analyze how the effect of endogenous factors (like density dependence) and exogenous factors (like abiotic climate variables) vary across the range of these species after accounting for the random effects of year and refuges. 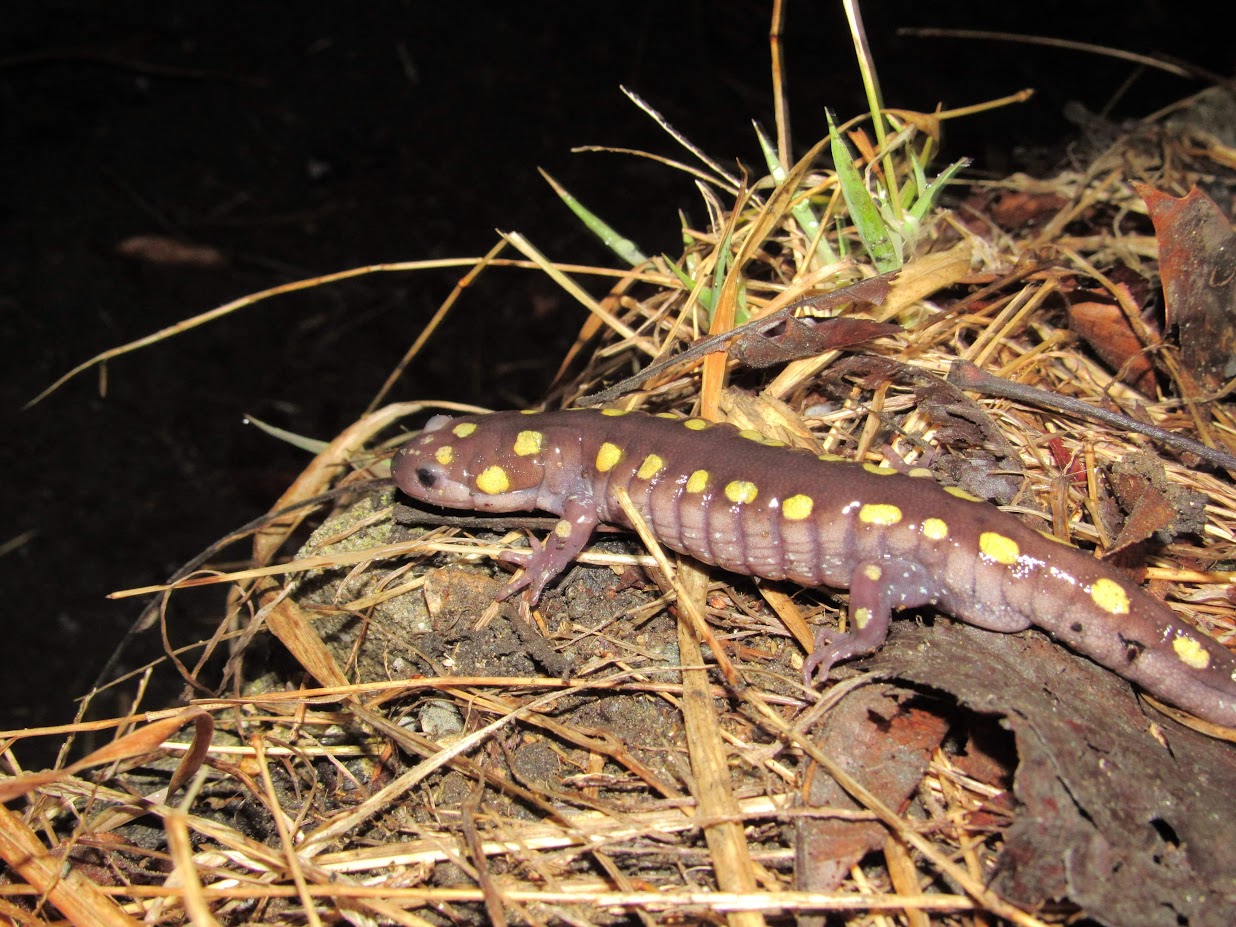 This is page is meant to be a fun interactive way to showcase some of my coding ability while letting folks explore my work and research experiences spatially. You can click a field locality to read a bit more about each experience. If you prefer a more typical CV experience, please page to the static CV tab to view or download my official CV

Tennessee Atlas of Amphibians and Reptiles: I was/am the primary coder for the modernized version of the Tennessee Atlas of Amphibians and Reptiles, which is currently in the very early prototyping stage. The atlas and many of its associated collections are managed by my graduate school, Austin Peay State University at the David H. Snyder Museum of Zoology. You can view some of the atlas's early functionality here. 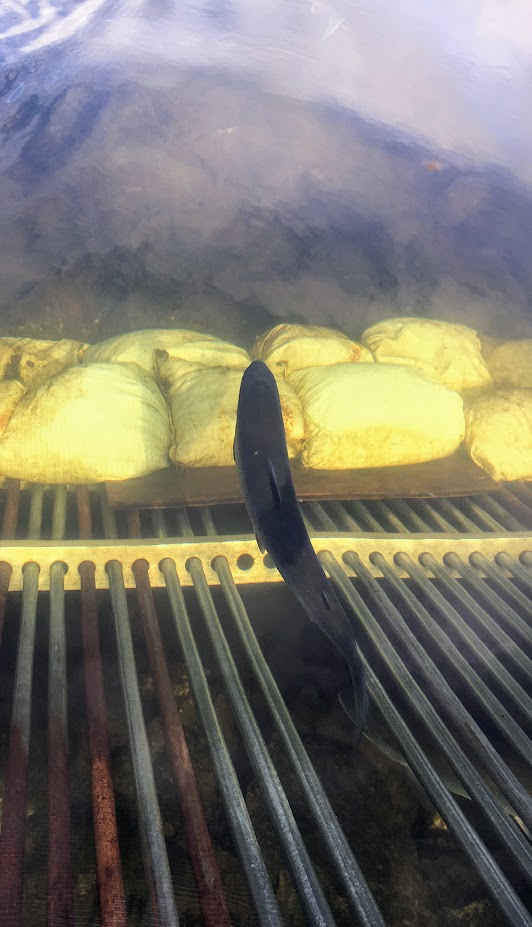 I spent May through September of 2017 working a fisheries position in southeastern Alaska with the Tongass National Forest Sitka Ranger Station. I worked on a remote weir on Redoubt Lake monitoring the influx of Pacific salmonids into the lake, primarily focusing on Sockeye Salmon as it is an important and historic subsistence fishery for the local community. The work primarily consisted of identifying and counting the species of salmon passing through the wier, anesthetizing some salmonids for data collection, including sex, mass, standard length, and scale samples, and marking some individuals for an ongoing mark recapture study. This work with the forest service is conducted every year to help monitor the stability of the salmon population at Redoubt lake as well and set catch limits for the fishery.

This job involved living and working at a remote field camp in the backcountry for up to 10 days at a time, and as a result required careful preparation and often creative problem solving to ensure successful field work. Additionally working in the backcountry, especially on a fish weir in remote Alaska, means it is imperative to follow bear safety protocols as we were often working in proximity to large Grizzley Bears. 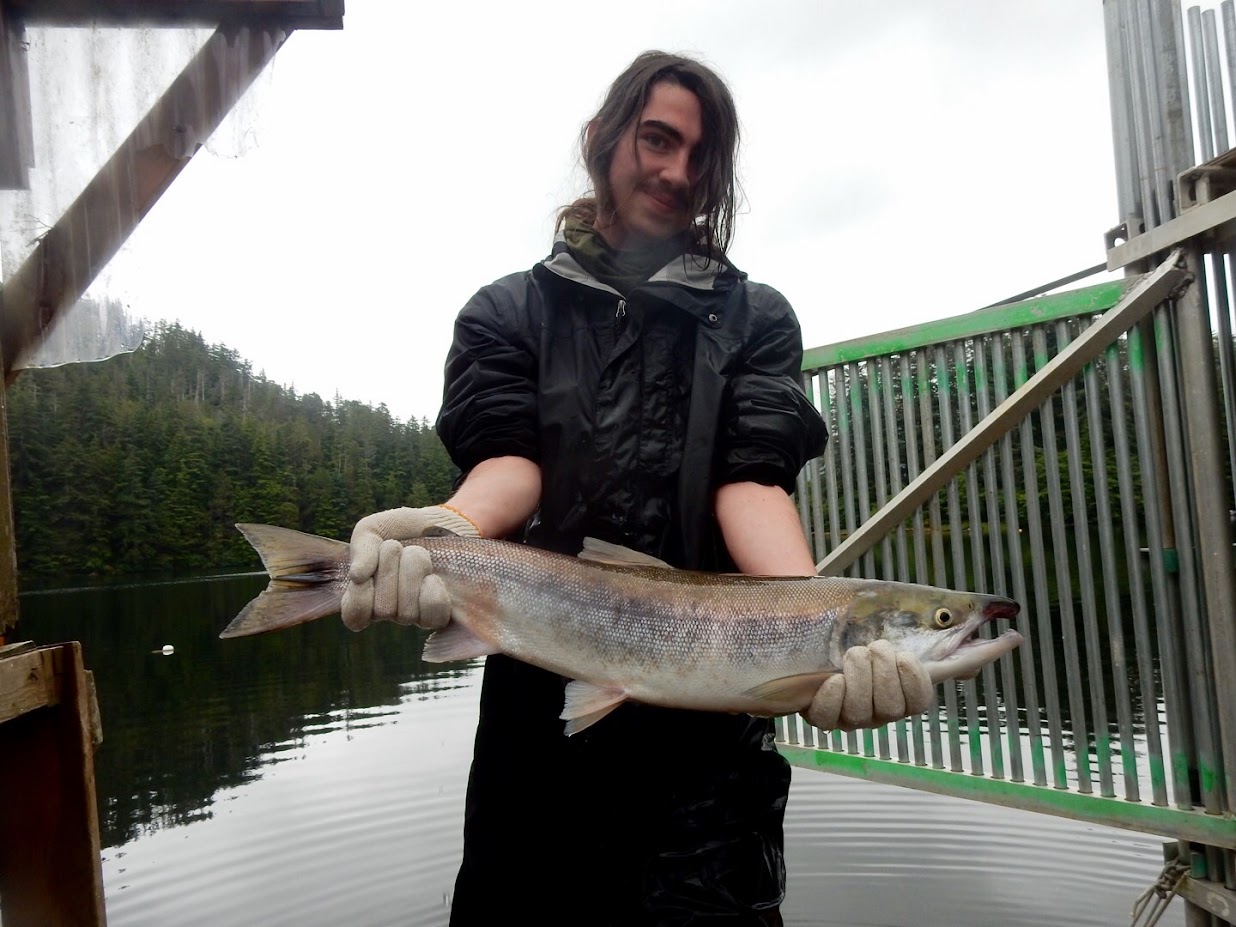 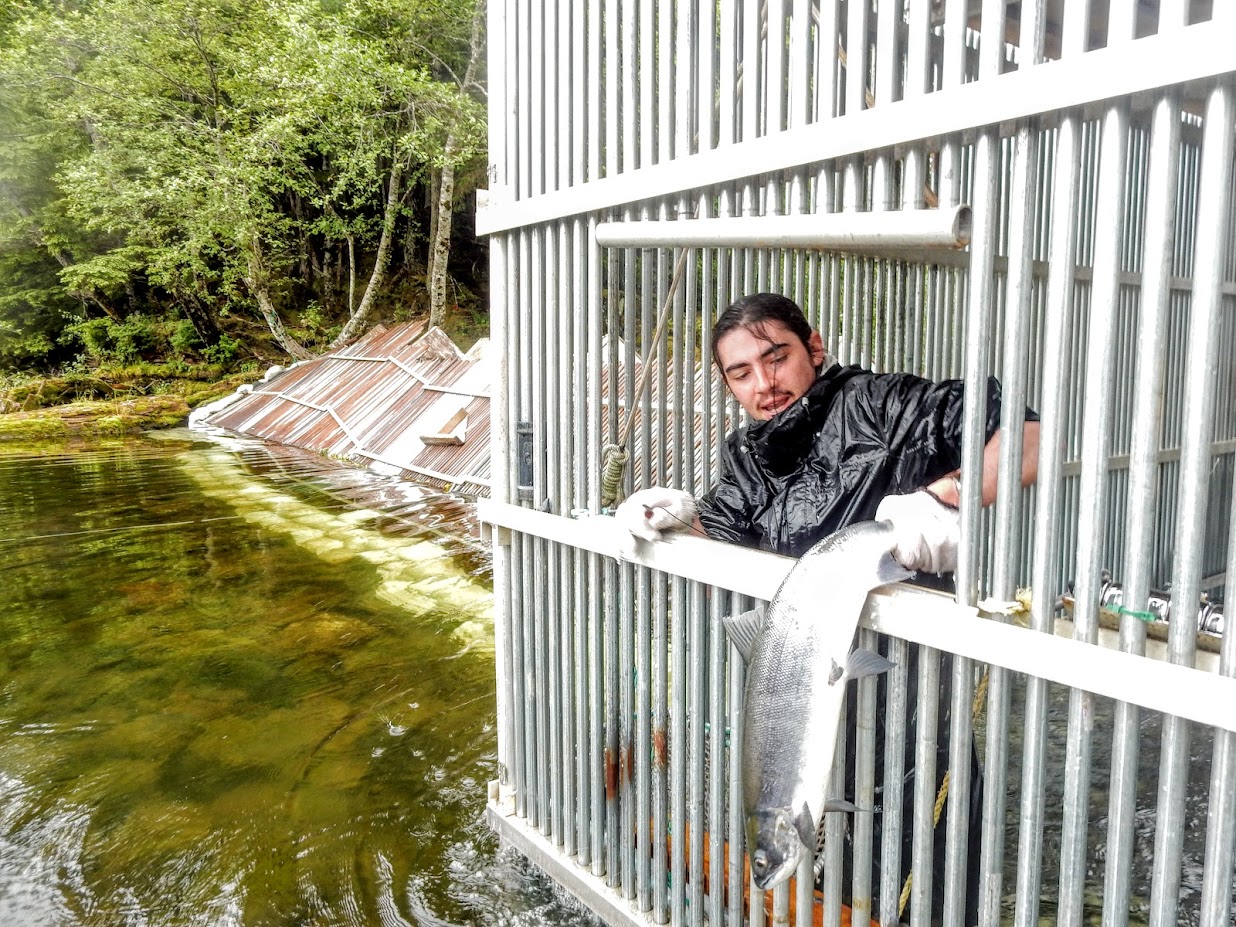 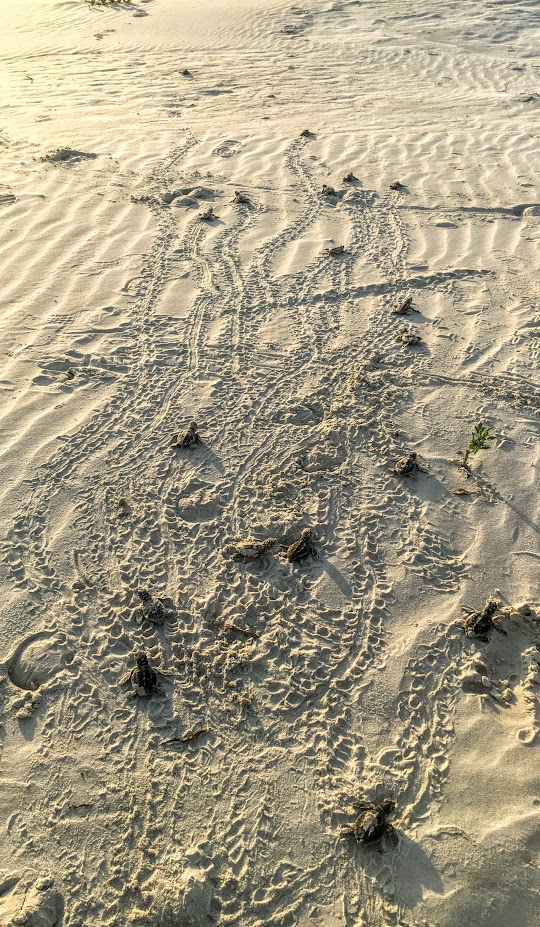 I spent May through August of 2018 working for the National Parks Service monitoring nesting Loggerhead Sea Turtles on Cumberland Island National Seashore in southeast Georgia. My primary responsibility was driving 18.5 miles of beach each morning at dawn, surveying for turtle emergences identifiable to species by the tracks left in the sand. I would then probe the sand at the apex of these emergences to find the actual nest location so that it can be marked, a genetic sample can be taken to identify maternal DNA, and steps can be taken to minimize the risk of predation to the nest. Midway through the summer responsibilities switch from primarily monitoring for adults to primarily monitoring for hatchling emergences and inventorying nests to collect data on percent successful hatch.

In addition to nest monitoring, this position also involved being one of the on-call biologists living on the island and assisting with any other projects on the island, including shorebird banding, gopher tortoise monitoring, and rescuing stranded/injured sea turtles and transporting them to the nearby sea turtle hospital on Jekyll Island. As a biologist working under the NPS, I also regularly prepared and gave educational outreach presentations to visitors on the island to share the important working going on on the island, and get people of all ages excited about biology. 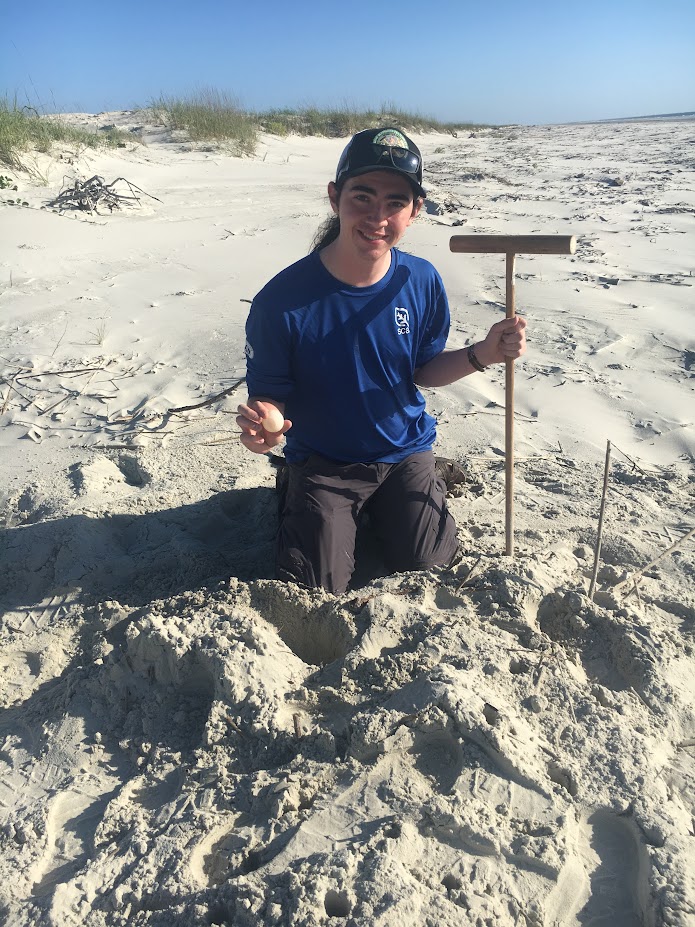 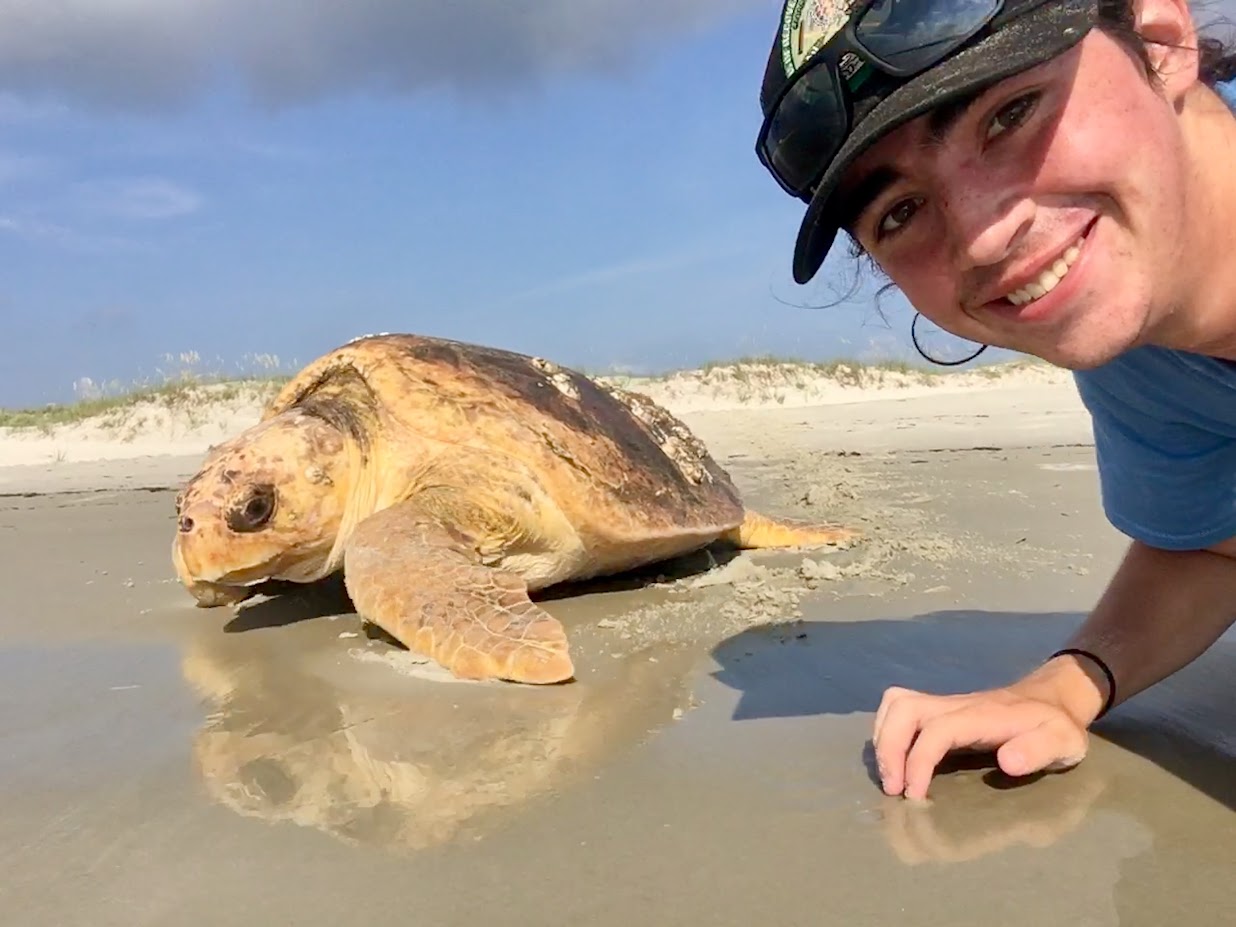 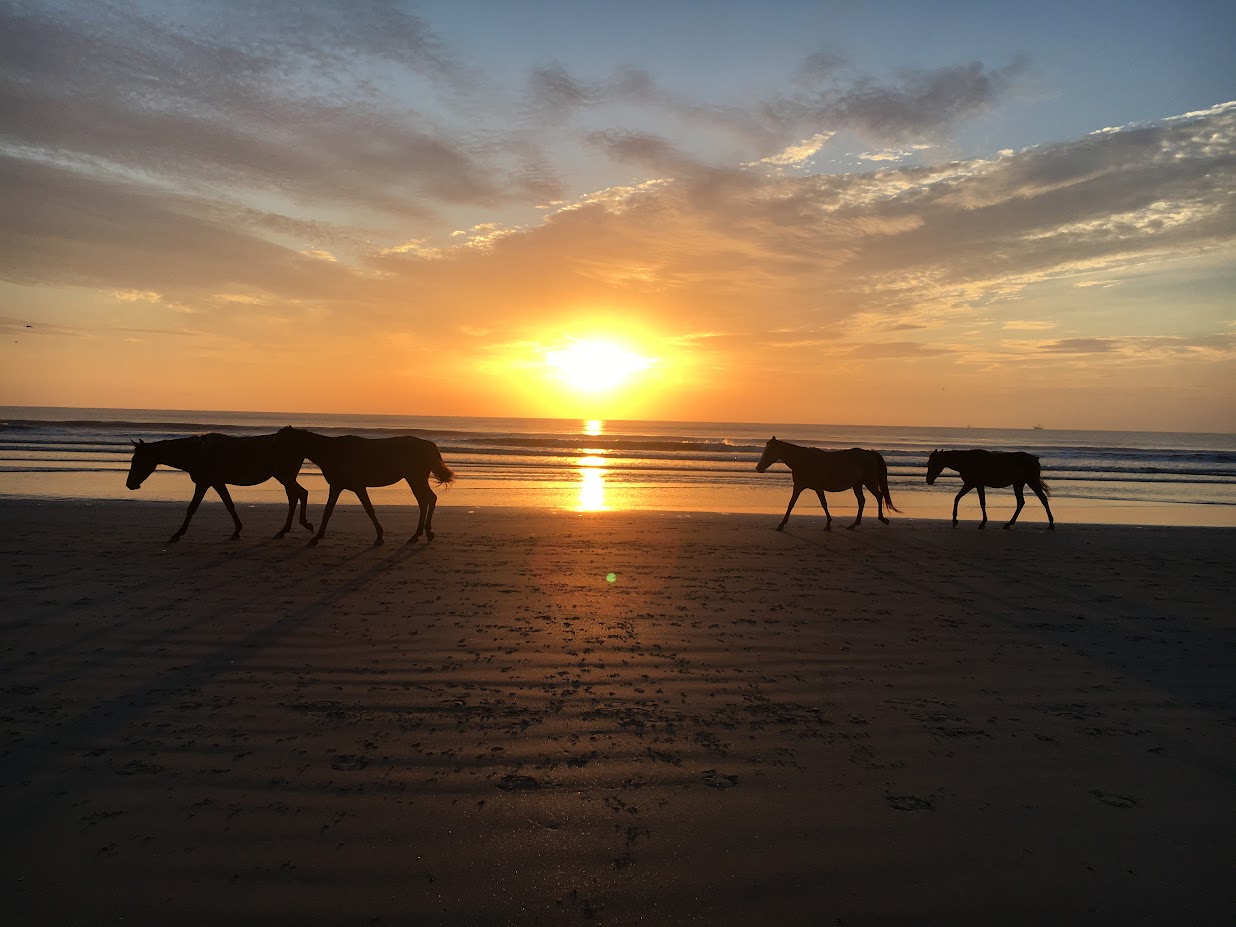 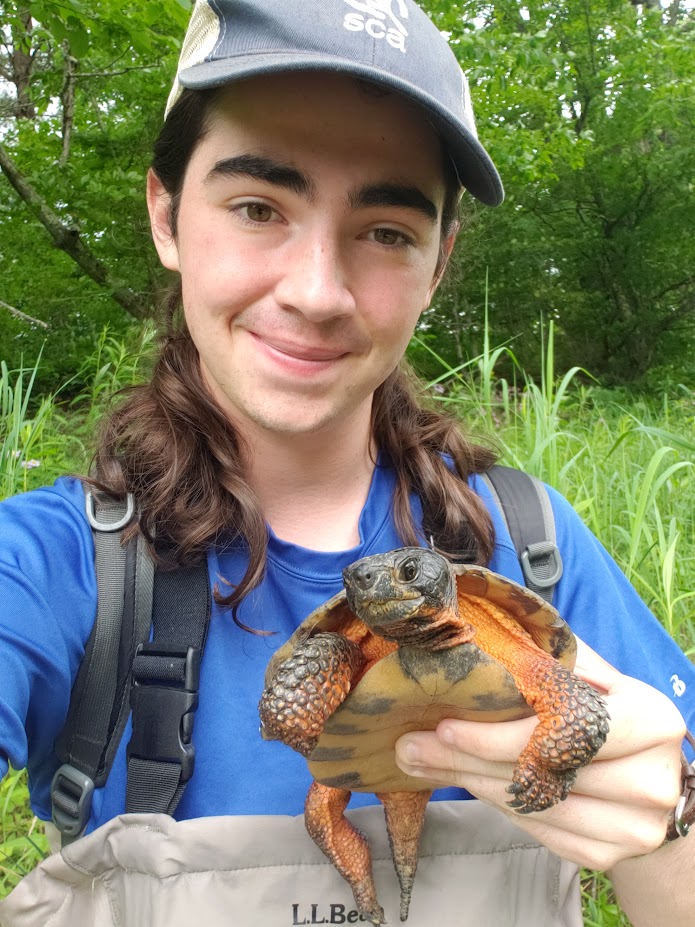 I spent April through September of 2019 working at six field sites around Western Massachusetts working for the American Turtle Observatory. This work focused on continuing to collect long term telemetry data on three turtle species of conservation concern in MA, Terrapene carolina carolina (Eastern Box Turtle), Glyptemys insculpta (Wood Turtle), and Clemmys guttata (Spotted Turtle). Two populations of each species were tracked, and individuals were tracked every other day. Field work was typically done solo, communicating remotely with other field techs, and driving between sites independently to tracking as many individuals as possible each day. 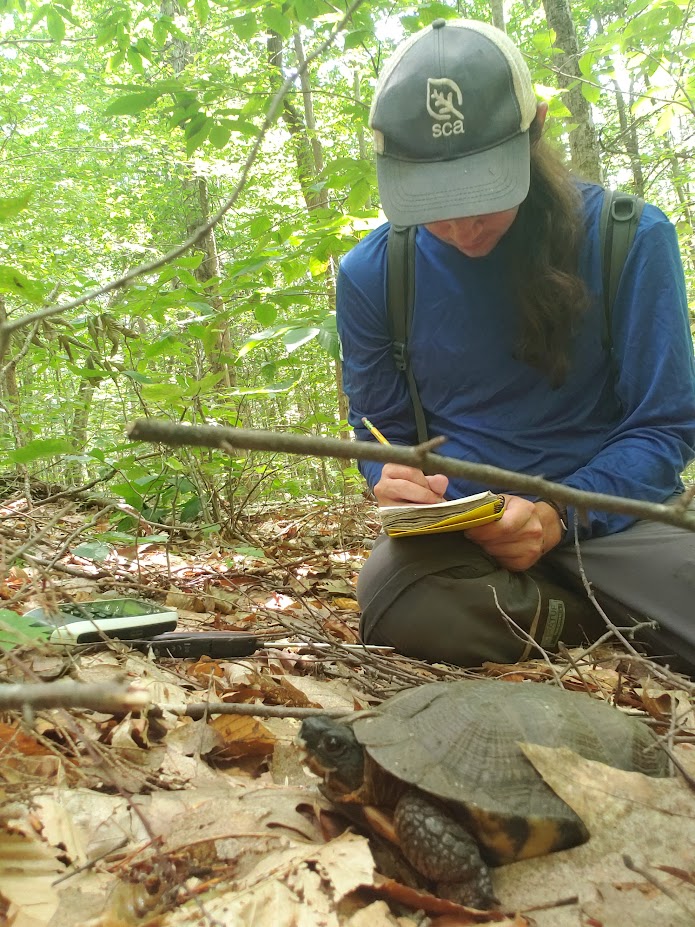 This project was unique in the fact that each of these species had very different natural histories and habitat preferences. For example, T. carolina are a predominantly terrestrial species, spending most of their time in upland forests and open sandy habitat. In contrast, C. guttata spend most of their time in densely vegetated wetlands or ephemeral ponds scattered across forested landscapes. G. insculpta are heavily associated with flowing water like creeks, streams, and rivers, but can travel significant distances into adjacent areas while foraging in the summertime. Because of this, each locality I was tracking at was structurally very different and you may start your morning chest deep in briars and mud and move through several different habitat types before your day ended on the banks of a river. This combined with low cell reception, often several mile treks back to parking, and New England's extremely temperamental weather patterns made being prepared for anything a necessity during the field day.

I spent March through August of 2020 working at field sites around Massachusetts for the USGS Northeast Amphibian Monitoring Initiative. This work focused on two primary projects, monitoring a system of ephemeral wetlands in two Massachusetts wildlife refuges, and monitoring for the presence of Batrochytrium dendrobatidis and Batrachochytrium salamandrivorans in a population of Notophthalmus viridescens in Western Massachusetts.

The first of these was part of a large scale project monitoring ephemeral wetlands across the more than 15 national wildlife refuges across the Eastern United States, collecting data on pools hydroperiod, and presence and abundance of amphibian species at pools across each park. This data collection was also associated with the later data analysis I would conduct in partnership with USGS. 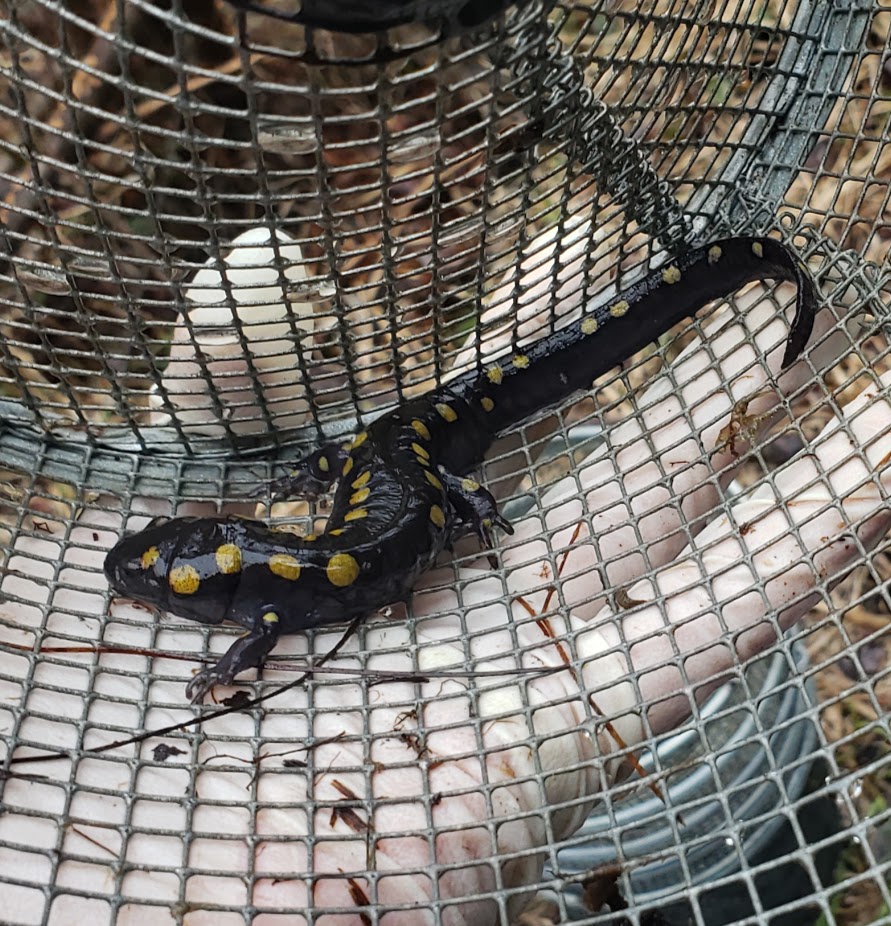 The later of these is part of a largescale mark recapture study on N. viridescens monitoring habitat use and disease staatus of individuals over time. This project is done in combination with similar B. dendrobatidis and B. salamandrivorans monitoring projects across the country to monitor the spread of these pathogens across the US, and to determine if local site factors can predict likelihood of disease outbreaks. 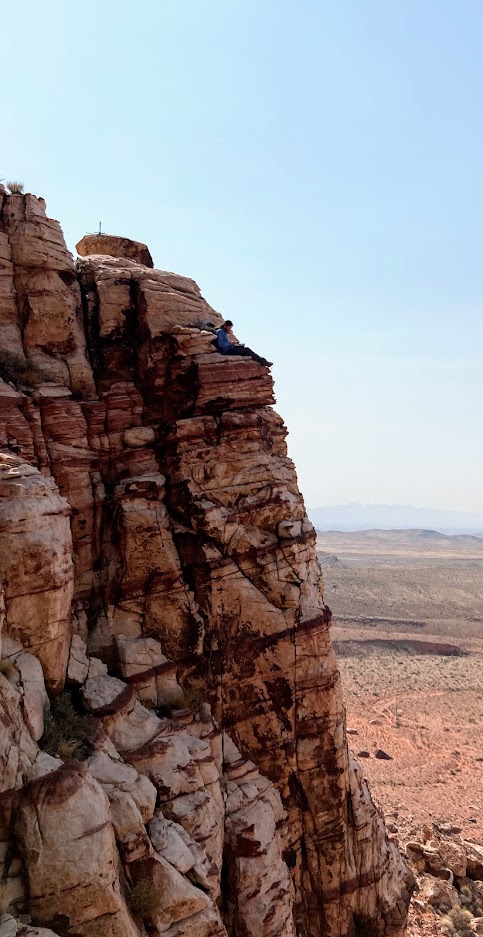 I spent April through August of 2021 doing field work in and around the Mojave Desert and other sites in southern Nevada, collecting data for my own masters research and assisting one of my fellow graduate students with the collection of her thesis data. The primary focus of this field season was continuing a long term radio telemetry project focused on the spatial ecology of long lived Heloderma lizards. This project involved tracking animals in extreme environmental conditions during the heat of the Mojave summer and traversing steep, uneven, and rocky terrain on a daily basis in order to collect high frequency, high quality data on these animals. This position also involved working around and in some cases handling venomous reptiles while also being extremely discreet while preforming field work because of their protected status. Because of the nature of this field work, perhaps most important to this project was working closely and communicating with other technicians in order to safely coordinate field days to ensure our own safety and look out for one another. 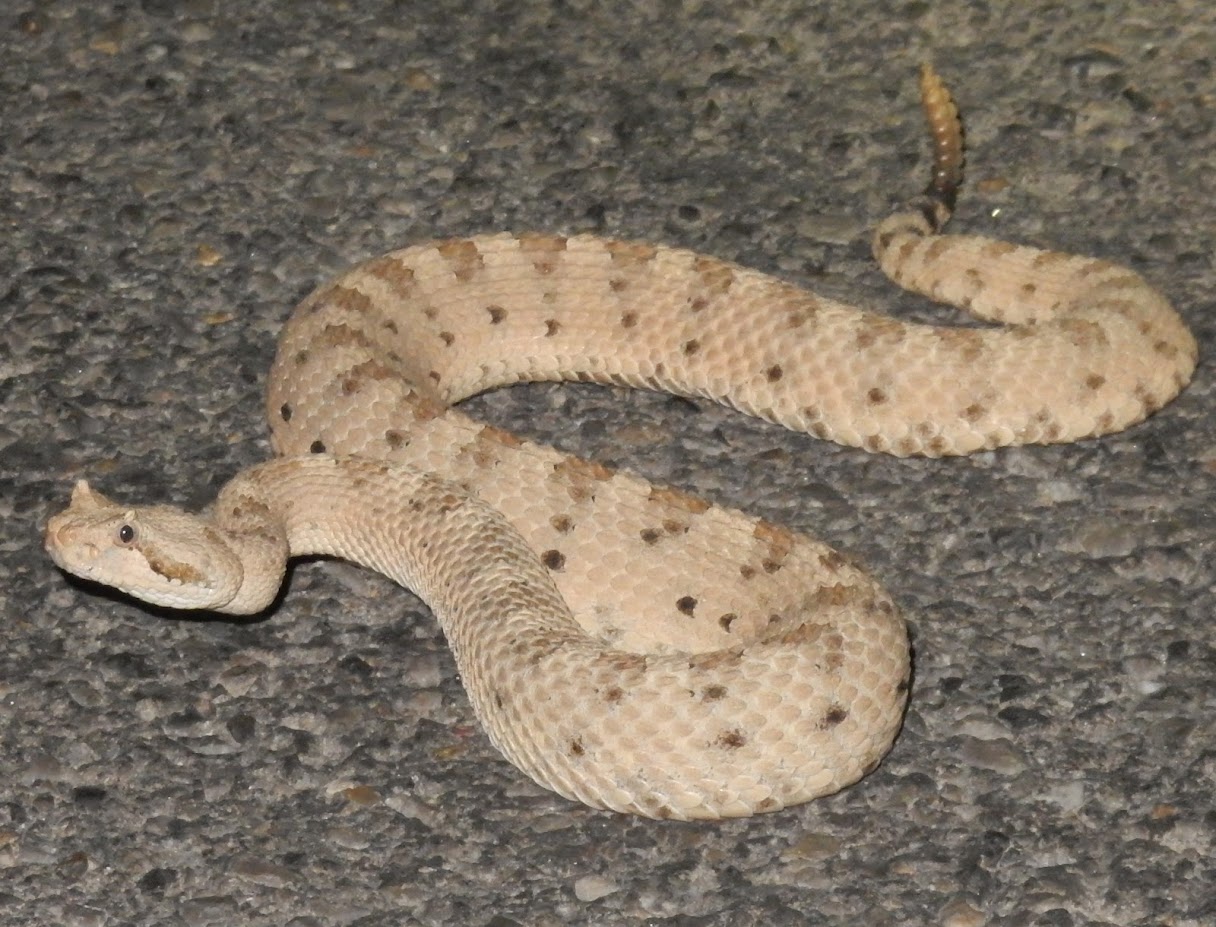 In addition to that specific project I acted as more general reptile biologist, reporting incidental encounters with other species of interest while in the field and assisting with other related projects in the area while working closely with the Nevada Department of Wildlife. Twice weekly I participated in standardized road cruising surveys with the intention of assembling lists of nocturnal snake and lizard species inhabiting a network of roads in the Mojave Desert, understanding species habitat associations, and quantifying the effort required to detect these species.